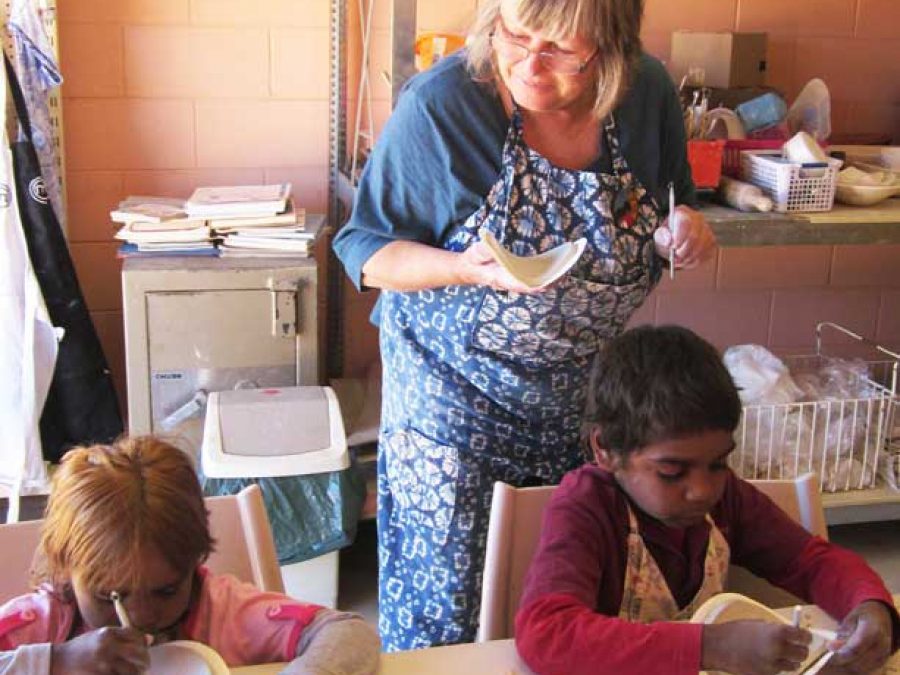 2016 is zooming by and my very short visit to Central Australia this year rapidly came to an end. I am often asked why I do this, head off to the small Aranda Community at Wallace Rockhole to run the pottery, my answer is simply that there is a need and I can fill it.

My home is in Tallebudgera Valley, South East Qld and since 2011 I have spent around five months each year travelling, towing my small caravan to Wallace Rockhole which is 120 kilometres west of Alice Springs in the Northern Territory. There I have set up a pottery studio financed with funds raised through Pozible, a crowd-funding web-site plus donations from my family, friends and pottery peers of not only their dollars but also materials and equipment.

Utilising unused kilns and two pottery wheels that had laid dormant at the community for many years, a very well equipped pottery has now been set up without any Federal, State, Territory or Local Government funding. It is an amazing experience for everyone when they walk into the pottery at Wallace Rockhole, a deep calmness descends, encouraging one to be creative.

Sitting at a work table making pots, decorating them, browsing through the pottery books or just having a cup of tea whilst chatting is an inspiring event. The first peoples lived in small patriarchal nomadic groups in the harsh desert environment of Central Australia. Even though moving across their lands for hunting, food gathering and water sourcing is no longer possible and these small groups have now been placed in various stationary communities, the culture of their ancestors is very strong and needs to be respected. Coolamons made from wood were used for carrying bush foods, water, fire embers and babies.

Clay and ochres were used for elaborate body decorations in Ceremonies and today are in sacred places so therefore not available for today’s potters. The materials we use in the pottery are sourced from suppliers in Queensland and Victoria (we are nearly ready to purchase our third tonne of clay). The studio has always been open and free of charge to everyone; young or old, male or female, anyone who would like to have a go with clay are welcome.

It has proven to be almost impossible to engage the older men and women working in the studio together, the younger ones don’t mind as education and time is creating a respectful space between the old and new ways. Each year during term three I hold pottery classes for the Wallace Rockhole School children, the children usually come in two groups, younger students one afternoon and the older ones the next day.

The school is only primary level, older children have to leave the community and board in Alice Springs or go further afield for higher schooling. Isolation is very limiting for outside of school time activities, therefore I try to make the studio open for the children after school and also on the weekend. This gives the children bragging rights to pottery as they are the only children in Central Australia who have had such a considerable pottery presence.

Using a potters’ wheel and Giffen Grip and a locking device holding the mold in place we drape a circular slab of clay that is hand pressed onto the mold, then whilst the wheel is running, smooth and trim the clay.

From this emerged a bowl and when removed from the mold, after a final neaten and with a slight squeeze we distort the bowl to make a lovely coolamon shape. This coolamon has excited everyone as it is a handmade container that is reminiscent of the wooden coolamons their grandparents used. This will be a real bonus to the emerging pottery cottage industry as it only takes a few lessons to master the technique.

Favourite bush foods that reappear decorated on pots are all types of reptiles; Lizards, Geckos, Perente, Sand Goanna and Python Snakes, plant foods such as bush tomatoes, bush sultanas, bush bananas and Quandongs, mammals like Kangaroos and Euros and birds, Emus and Bush Turkey. Then ther is the very popular Witchetty Grubs and the much sought after Honey Ant, a treat with a yummy sweet honey cross maple syrup taste. These foods are still eaten to this day. One of our artists, Angela Abbott, has mastered her skill as a potter in a very short time which is a credit to her diligence and dedication to ceramics.

Even with a very busy personal life of a full time job and a grandmother to four children, Angela still manages to have stunning work come out of each firing. Angela is learning to throw her stoneware pots on the wheel. These pots are coloured with underglaze colours, and hand carved. A figure is sculptured and attached to the top, the pot is then painted with underglaze colours. Next Angela hand carves designs through to the clay and with a jig-saw cut, the pot now becomes a vessel. After the bisque firing, the works are clear glazed on the inside and the sculpture on the lid is also glazed and put back into the kiln for a firing to 1285C.

All of the work made at Wallace Rockhole is high fired which makes it into a very tough product that is dishwasher safe, oven and micro-wave proof and fully functional. Angela Abbott also works with Queensland Buff Raku with Trachyte clay. When this clay is high-fired the trachyte pops to the surface giving it the appearance of the conglomerate rock that is in some of the rock formations in central Australia.

These pots of Angela’s are very popular and as she does not make very many of them she usually has people waiting for them as they come out of the kiln. All finished work can be taken home and used or sold through the Wallace Rockhole Art Centre.

Other outlets for the sale of these pots are now opening up in Yubu Napa and Central Craft in Alice Springs and Voyages at Yulara. My hope is to pass the pottery over to Ken and Glenys and I then become their technical adviser, tweaking things as needed and to offer moral support. My plan is that I will still work with the children and be a guide for the beginners as they begin their ceramic journey.

A very big break-through for Wallace Rockhole Pottery this year has been employing staff. Ken is employing Kathy Breaden and two of her daughters Louise and Sheena to decorate the pots that he is making.

This year one of Wallace Rockhole Pottery supporters passed away and Alice Springs lost one of it’s treasures, Nancy Hall. Nancy was a potter who had been donating her wonderful pottery books, materials and equipment to us for a few years.

It was Nancy’s wish that her pottery studio be given to Wallace Rockhole and it was with sadness that I approached the pack-up of her studio. Her books are a boon for the pottery, a visual feast that totally inspire the children. After six years already of making pots, some of these children are talking of being potters when they finish their schooling.

The Wallace Rockhole Pottery is very thankful to you all for your support and interest. Thank you, you are part of something wonderful, a true innovative way of helping those less fortunate and isolated but wow, those kids eyes when they see their creations finished, full of colour with their very own shining glossy glaze, that is what this is all about.

Happy, smiling faces, twinkling eyes, the joyful sound of laughter and a step with pride and respect.

And my favourite from the kids: “Watcha doing Su, can I join ya?” 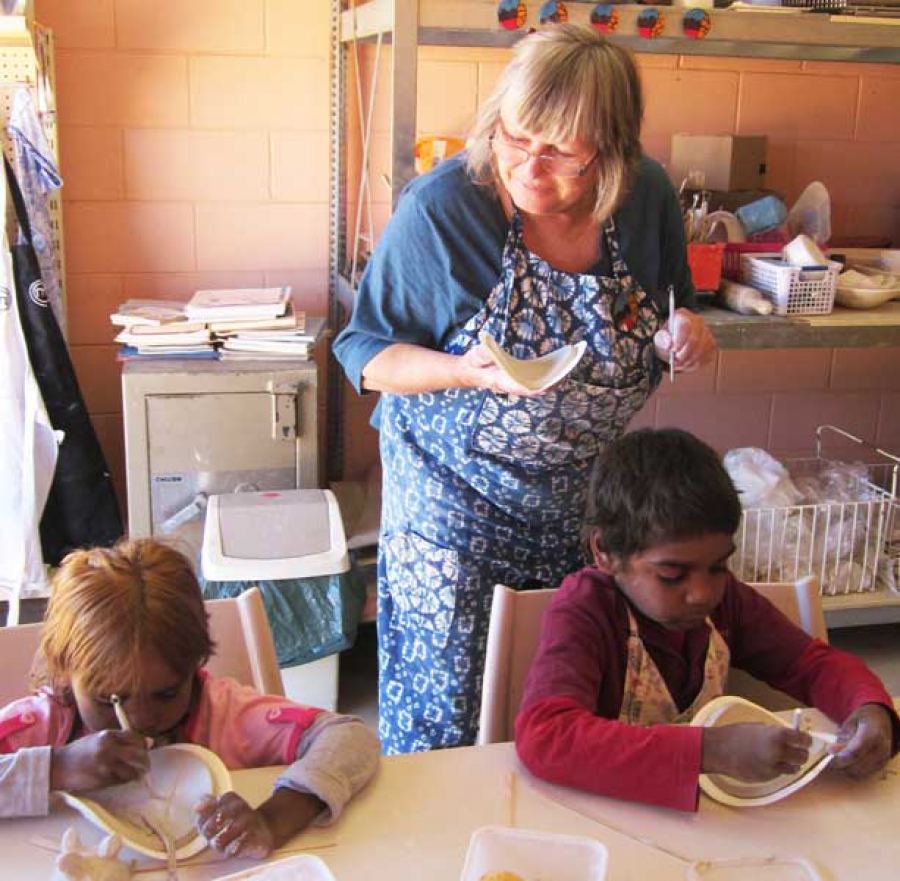