The Kyoto Potters – Smoke on the Water 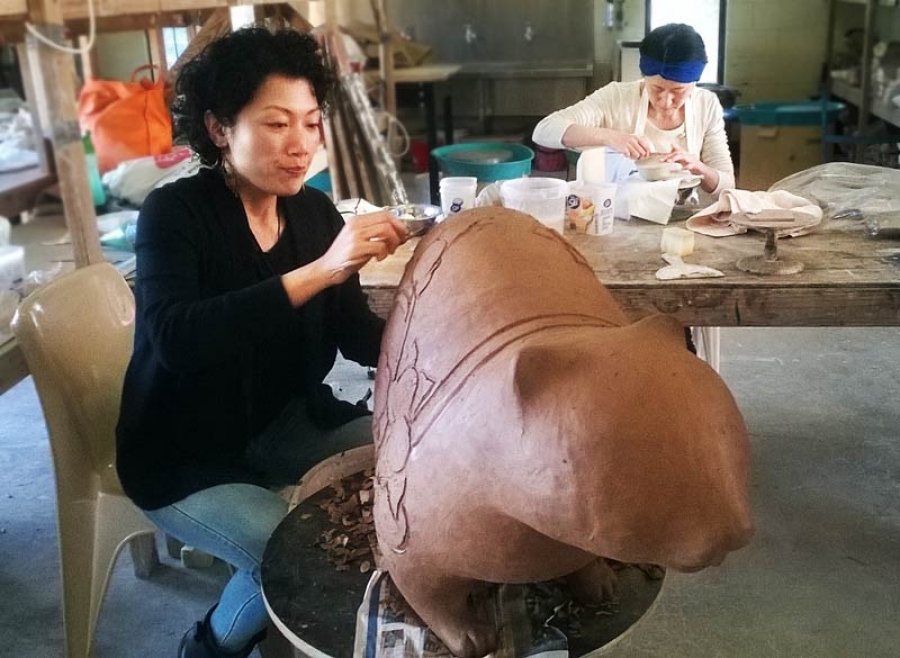 The Kyoto Potters – Smoke on the Water

Japanese pottery is distinguished by two polarised aesthetic traditions. On the one hand, there is a tradition of very simple and roughly finished pottery, mostly in earthenware and using a muted palette of earth colours. The other tradition is of highly finished and brightly coloured factory wares, mostly in porcelain, with complex and balanced decoration.

During the 16th century ceramic artisans from all over the nation gathered in Kyoto, the capital of Japan at that time.

Derek spoke of his life as a potter contrasted with his former life in academia as a lecturer and professor of art at the Kansas University and the University of Central Missouri.  He has written passionately about the transition from thinking and teaching about to being a practitioner total wedded to an art form.

“Following over fifteen years of kiln building, firing, and making, I find it increasingly difficult to talk about my work. I can no longer use the romantic art speak I used as a masters degree candidate or even as a professor, I walked away from academia. My life and art making have converged, inseparable, asking me to explain my work is in essence asking me to explain my life.”

Derek said that in Kyoto there is a huge range of pottery being produced.

The Japanese have an insatiable appetite for both food and beautiful pottery and together, these two elements are very much a part of the eating experience.

He also noted that, “The Japanese people really do get out and support their artists.

Pottery is something that I was willing to die to do. I sold everything I had to achieve this. I was determined to make pottery my life.  Derek moved to Japan and married fellow artist Kasumi Ueba.

Together they live in the remote mountains North of Kyoto in the lower third of main island of Japan – Honshu.  Of their new home, Derek says he lives in “Suberishi, population two, anagama kilns, one”.

Derek says he creates ceramics that are “hardworking, honest, humble, intelligent”. There is a local clay body called Kinose that has been used by the potters of Shigaraki district. Shigaraki is a ceramic town of Koka City situated in the southern part of Shiga, and known as the home of Shigaraki ware. It has one of the six oldest kilns in Japan.

The Kinose clay body has been used for hundreds of years. “I seek to maximize the natural beauty of this material through the firing process,” said Derek. “I view firing as a creative act.”

Derek said that a critique of his work by a visiting professor some ten years ago made a lasting impression on his life outlook. “He said he enjoyed my work, complimented my technical knowledge and was captivated by some of the natural surfaces I had achieved.”

However, in the last moments of their meeting Derek said the professor said, “…. in order to make even better pots, you are going to have to become a better person.”

Fascination with art began watching her grandfather hand-painting kimonos with slow and steady brushstrokes that spoke of care and craftsmanship.

Kasumi also much admired the ceramics of the 17th century Kyoto potters. Working in the Edo period, Nonomura Ninsei and his student Ogata Kenzan produced much copied Kyo-yaki, or Kyoto pottery, with its brilliant overglaze enamel illustration.

“Looking back,” says Kasumi, “I was lucky to be surrounded by such beauty and craftsmanship”.

Kasumi’s art for the past seven years have focused on the theme of the Chimera – the mythical Greek creatures compounded of incongruous parts.

Chimeras she says, are like the Japanese ability to understand and appropriate foreign ideas and techniques. To then develop, recast and transform them into something new and uniquely Japanese.

At Smoke on the Water Kasumi sculpted a massive wombat, a short-legged, muscular quadrupedal marsupial (see photograph above). Wombats, kangaroos and platypuses are just some of many Australian chimera like animals that seem to Northern Hemisphere eyes to be composed of left over parts of more familiar European mammals.

Kasumi’s forms are hand built or thrown in red clays or porcelain and then then carved. Sometimes white slip is applied to the surface. Clear or feldspathic glaze are applied.

Depending the piece, they are fired in gas, electric or they are woodfired. Increasingly she is using an Anagama kiln build by her and husband Derek Larsen.

Following the main firing, Kasumi then follows the Kyoto iro-e glaze traditions, applying multiple layers of designs, patterns, and imagery. These are painted on by brush using lusters of gold or silver and finally a layer of colored using enamels to highlight the designs. These third and fourth firings are to around 800 degrees.

Born in Hiroshima and graduating from Kyoto City University of Art, Aki says she is fascinated by the shapes, patterns, transience, subtleties and power the natural world generates over years of weathering natural variation and evolution.

Aki has developed two original ceramic techniques that bring a unique look and experience to her work.

In her own words, Aki describes these techniques:

Aki makes her own porcelain clay. She layers slabs of porcelain and applies coloured porcelain slip like a “sandwich filling” between each layer until she has a vertical “stack”. She allows the stack to dry and then carves the pot out of the solid clay in to vessels.

These vessels have the fine lines from the coloured slip in organic lines in and around the pot.

“I find supreme happiness in having the natural objects of my fascination close to me in everyday life. In daily life, we can neither gaze at a stone or a shell all day long, nor can we absorb ourselves in nature photograph collections everyday.”

“When we have a meal, we need vessels, and when we meet people, we need clothes. To live comfortably we need furniture. There are necessities of daily life.”

“I get great fulfilment from making the things we see and use every day, and the special vessels we use to entertain a visitor reflect the objects of my fascination in nature.”

“I don’t aspire to out-do nature.”

Chester Nealey’s closing comment to the presentation of the Kyoto potters: “We all need a little madness to carry on!” 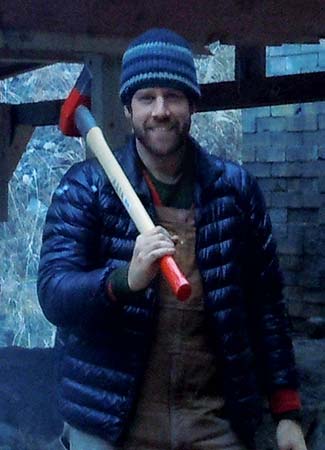 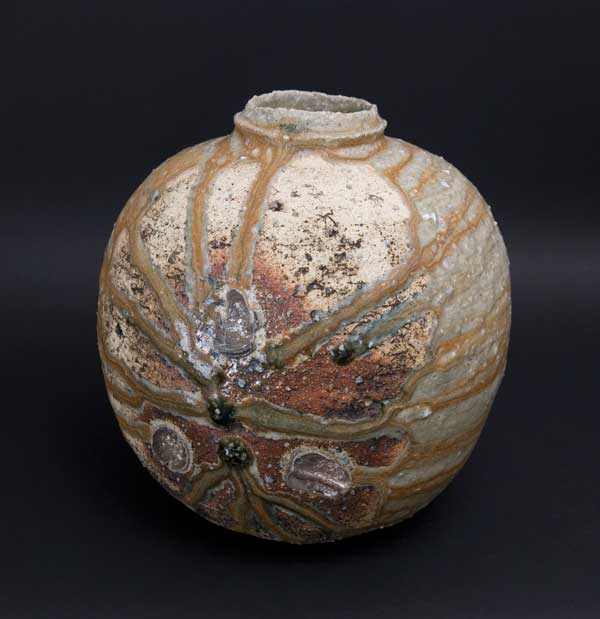 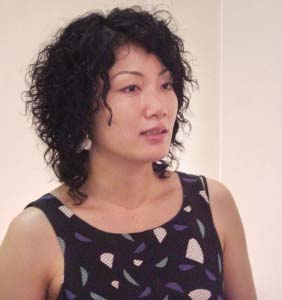 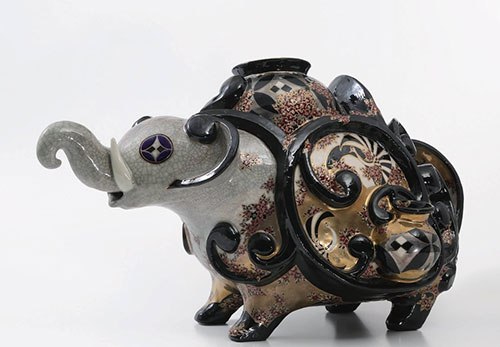 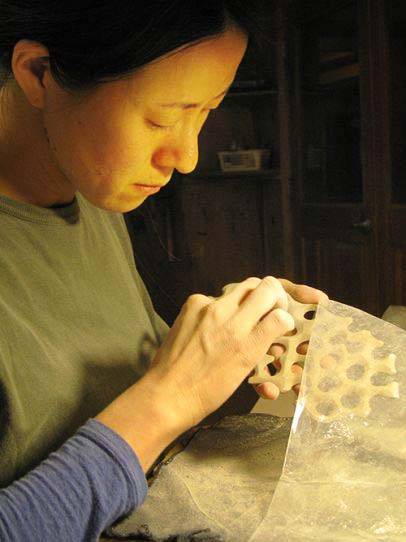 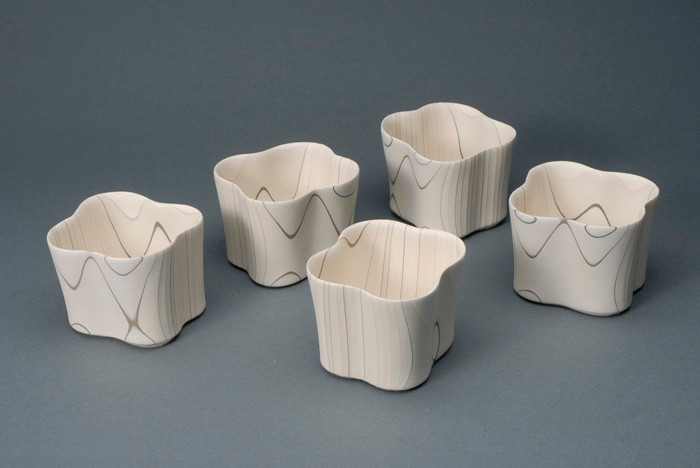