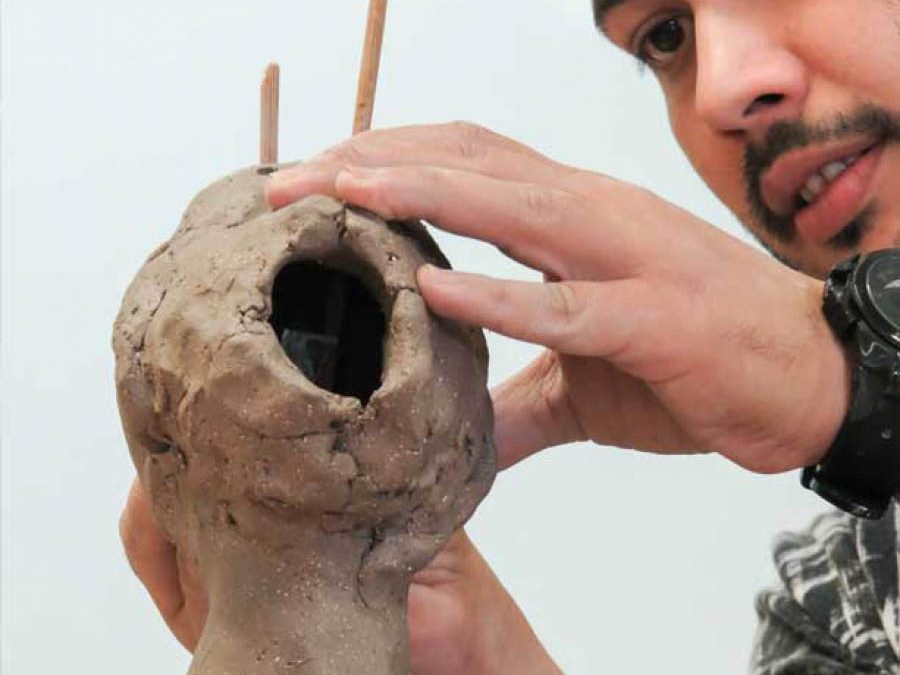 Sculptor Alexander Esenarro has flown in from Melbourne to present the last of Ceramic Arts Queensland’s Toolkit workshops for 2016.

The RQAS – an impressively large and well-designed ‘Queenslander’ houses a library, teaching rooms and gallery spaces that are well used by the Brisbane Arts community. Before the start I chatted with Alexander – an engaging and exuberant artist, born in Columbia. He came to Australia 5 years ago.

“How did you start with clay?” I asked. “I started with plasticine,” he replies, “I didn’t have so many toys so my mother gave me plasticine to play with.”

That youthful experience with plasticine paid off when his first design job was stop-frame animations of figures using plastic clays – a painstaking process where the sculptor/animator moves each of the figures just a little bit, taking a shot, moving it some more, taking a shot and building up a sequence of frames when played at 25 frames a second, seem to bring the figures to life.

Understanding how bodies move and articulate was key to his animation career, but it is also an important aspect of Alexander’s current sculptural practice. “When you are making a sculpture, everything is about the anatomy. I reference old fashioned anatomy and even medical books showing exposed muscles.

I love referring to Da Vinci and Michelangelo – they are the ultimate inspiration for me”. “When you are working with ceramics you have to have a plan and work with simple tools.” When all the participants had arrived (some coming from as far as Northern NSW) Dianne Peach introduced Alexander and the workshop began. His first demonstration was a female bust.

He wrapped a slab of clay around the base of the armature to form the shoulders and then forms a cylinder for the neck.

“The neck is so important – I focus so much on the neck. The neck should always have movement.” The flexible armature allows him to achieve this.

“People do not have straight stiff necks. A long neck makes the sculpture more romantic and elegant.” “I don’t believe in perfect proportions.

I like to exaggerate the features to create interest. I also love this stage with its unfinished look.” To make the sculpture as light as possible (“I pay by the kilo for firing so it cannot be too heavy!”) and to avoid explosions in the firing he slices through the back of the head and removes the newspaper before thinning the walls and manipulating the clay to form the back of the head but leaving a hole still open.

He removes the bust from its armature and places it over a smaller one and adds wooden skewers for support. Alexander again stressed the importance of knowing about human anatomy – “when you work on a piece going through the steps using your knowledge of anatomy, you feel more confident.”

The afternoon flew by as we observed Alexander’s deft crafting of a male bust using more traditional lines of anatomy to show us how he constructs the head as a skull and coats the bones in skin and muscle. The “male face” is bolder with more prominent features and muscle arrangement. As with the female bust earlier, he added marks to show the limits of the features and paid a lot of attention to the mouth and the muscles around the mouth. Finally he returned to the female bust to work on the hair .“You need to make the hair part of the sculpture and make sure it looks attached”.

The ears begin by making a “question mark” shape. Small pieces are added to create the “cartilage” and a concave shape carved out to give the illusion of the hole to finish. All the main features are smoothed with his brush for the final look. He glazes in a simple commercial matte white or black glaze or just engobe and once fires.

One last gem from Alexander – “don’t worry about cracks, if there are cracks make them look like cracks!” 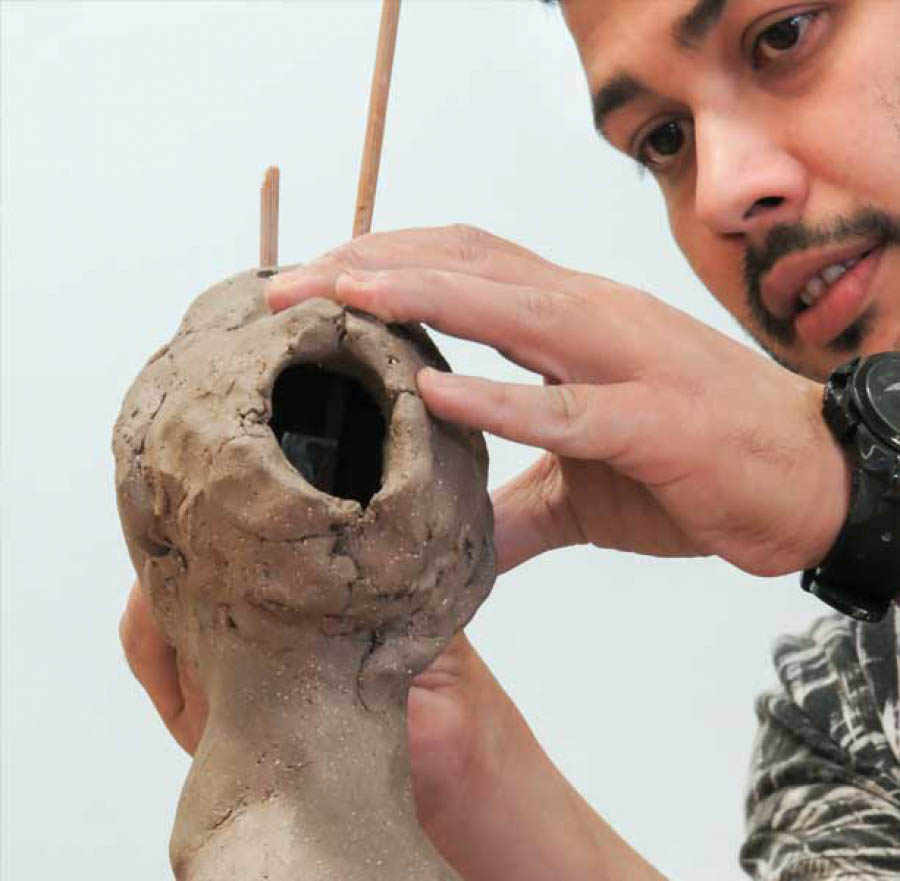