Roderick Bamford on the Future of the Clay Process 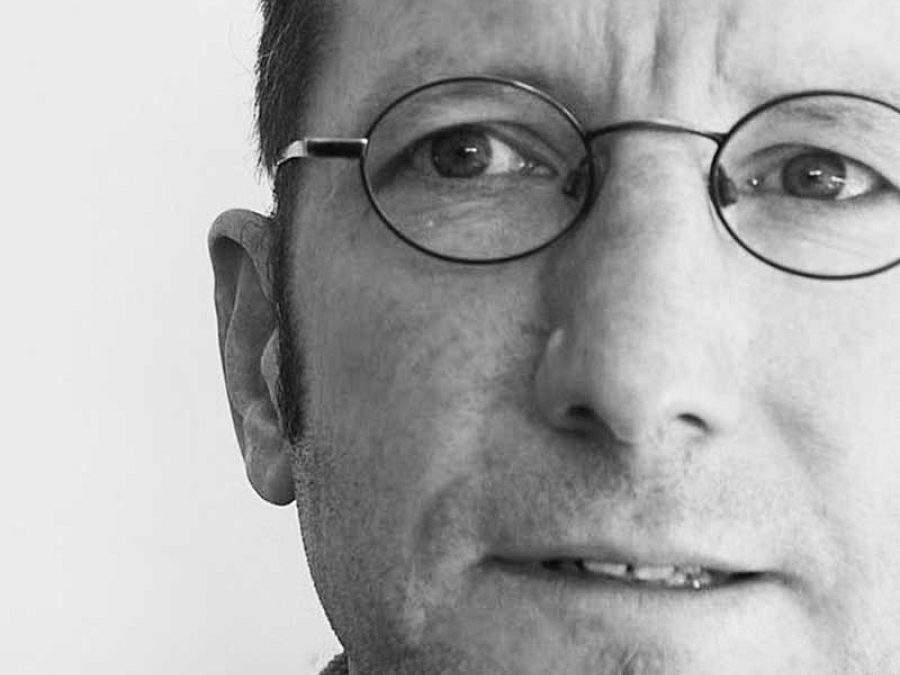 Roderick Bamford on the Future of the Clay Process

For many artists, the process for producing their work is often as important as the final outcome. At the other extreme there are artists who care little for the process and value only the final result and the ideas and concepts that encapsulates.

Every one of us makes a series of choices about how we invest our artworks with the essence of meaning through our selection of the techniques we use to make them.  All of this impacts on the final products we deliver.

Rod Bamford is a practicing ceramic artist who has incorporated 3D printing into his work from the very early days of the technology.

Here is a brief interview we conducted with Rod Bamford  to outline his process.

The first step is to transform an idea from a 2D sketch into a 3D computer model, either by drawing directly with a 3D modelling programme, or using 3D scanner to capture the geometry of a physical 3d model, e.g. a hand modelled clay object.

Nowadays even a series of photographs can converted to a 3D model with the right software. Once the 3d computer model is complete, it needs to be saved as special file format, called .stl. This format describes the model as a mesh made of tiny triangles that can be read by all 3d printers.

The next step is to transfer the .stl file of the model to the 3d printer.

Software in the 3D printer reads the file and prepares sliced contour pathways. The print head then follows the pathways to create the shape, layer by layer.

There are a few different types of 3d printers, the most popular are ones that print plastic. However amongst the wide choice of brands there are generally two 3D printing workflows for creating ceramics.

The first is indirect, where a plastic model is printed and then used to create a plaster mould from which ceramics can be slip cast or press moulded. In this case the plastic model replaces the traditional plaster or clay model.

The second workflow is direct clay 3D printing, where the shape is created by the 3D printer depositing clay directly. In this category there are currently methods used.

The most accessible is clay extrusion, where the 3d printer nozzle squeezes out plastic clay akin to a miniature coil building robot!

There is also a powder based process where the shape is solidified by a binder printed onto the powder in layers.

The third type is similar to the second, but uses a laser bean to solidify the shape from a wet bath of a special resin mixed with a ceramic material.

For about 8 years now. I first used plastic 3d printing to create a porcelain work called ’sonic loop’ in 2006/7. You can find it and the process featured in Hoosen and Quinn’s and “ Workshop Guide to Ceramics” ISBN 10: 978076416X.

At that time there was only one affordable bureau I could find to print the plastic models used to make the mould.

Shortly afterwards, the Reprap movement started to gather pace ( an online group of people sharing information about making their own 3D printers).

I became very interested in this as a few kit machines emerged that were available to purchase and modify using different mechanical and electronic parts. It was all very experimental. I purchased my first kit around 2010. It printed plastic, which was very useful and made 3d printing of our studio workshop production models affordable.

In my spare time I started working on ideas to redesign the 3d printer so it could print clay, and by being part of the shared online community, connected with a few other people in the UK and Europe were experimenting with similar ideas. In 2010 I managed to build a paste extruder print-head and complete a working ‘ proof of concept’ prototype, one of the first three clay printers published around that time.

In 2011 I also adapted my machine to print food which was shown at an experimental exhibition by the RED Objects group at UNSW that year as part of Sydney Design week.

In the ensuing couple of years though 3D printing really caught the public’s imagination and research took off. When working at UNSW (Cofa), I received a grant to buy a plastic 3D printer – it cost $80K. Now a $1500 machine will print at the same quality.

Many more people started exploring and building different 3D printers, both at the ‘open source’ shared information level, and the industrial level. They were able to progress our early work very quickly.

The development of 3D printed ceramics has made most gains in the extruded direct clay area. It’s a relatively simple technology and purpose built clay 3D printers are now more readily accessible, though the costs are higher than for plastic printers, and they are a bit more tricky to use.

Apart from the printers themselves, software development has moved ahead in leaps and bounds, making the whole 3D printing process much easier.

There are now many technologies available and start-ups are popping up regularly. What are the most exciting companies and trends?

That’s a hard question for me to answer. I tend to favour the companies that have been developing their 3d printers for a while, rather than the newer start-ups.

Operating 3d clay printers requires quite a degree of skill and there are many variables and things that can go wrong – alongside the excitement of accidental discoveries of course! So I’m looking for reliability experience and support.

There are three companies that fall into that category for me, specialising in developing direct 3d clay printers, Wasp, Vormvrij (Lutum), and Deltabots (potterbot).

Some are very exciting, such as Formlabs, who developed a high precision multi-material 3D and went on to develop a resin based ceramic material, but others, particularly some I’ve been looking at recently are extensions of the development work taking place in the online open source communities, and I’m familiar with many of those developments.

It’s a good way for people to fund their research, but I’m cautious that some technology product development can be bit premature at launch and buying may not be the bargain it can seem…. the early adopter curve has it’s associated risks.

What are the open-source solutions you talk about in your videos.

Open source communities gather around areas of interests, such as 3D printing, and discuss these on internet websites and forums.

They are made up of people interested in developing technology solutions, discuss ideas and are willing to share their knowledge, either directly with other members and sometimes using IP licences such as ‘Creative Commons’. https://creativecommons.org.au/.

Not easy to quantify. Those that like experimentation, working with digital processes, and are interested in the iterative possibilities of 3d printing. They are new types machines that can produce both unique and serial objects,

but production speed is not yet up to more traditional methods of making, so the former I think is where the value lies.

Earlier on I noticed that a large number of people interested in 3D ceramic printing come from the design field, architecture and engineering, outside the ranks of traditional ceramic practitioners. This surprised me a bit, but I think the situation is now changing as the technology id becoming more reliable.

All tools and technologies have upsides and downsides. What is 3D best at and where does it have shortcomings. Are these shortcomings likely to be overcome.

As an experimental tool for creating unique objects, small editions or for research. It’s advantage lies in the capacity to produce a wider variety of shapes than by other methods, and more directly.

Having said that the technology is still on the pathway to achieve that promise. It’s promise is tangibly evident in our imaginations, but not quite there in practice. I can’t guess when the technology will mature, but I don’t think there’s much point in using 3d printing to make traditional ceramic shapes, at least at the moment.

Even when the reliability and resolution improves, I highly doubt whether it will absorb or replace other ways of making ceramics.

The current 3D print resolution leaves a ‘digital’ fingerprint that comes from layering. Look at the many images of 3d printed ceramics on the internet and you’ll see the prevalence of a ’stratified contour’ aesthetic.

But there are many options for different ways of finishing a 3d printed work once it’s left the machine… that’s where the creativity and knowledge of those familiar with ceramic processes can really leave their mark!

What role do you see for 3D in production ceramics

3D plastic printing is already extensively used as a prototyping tool, and for mould making, in studios and in manufacturing. 3D clay printing is being explored, and there is definitely interest at a manufacturing industry level. I can’t see 3d clay printing moving into mass production in the foreseeable future, but it is beginning to become good enough for studio scale, small volume runs or limited editions.

In industry it could find its role in prototyping, but plastic 3d printing seems to serve current purposes as it’s easy to bridge with the widespread use of mould based production technologies

Some traditional potters worry about technologies like 3D. Are their concerns justified.

I don’t think so. It’s a bit like the paperless office. People were concerned that the digital world would put a finish to careers based around printing. We use less paper, thankfully, but I would argue that it’s actually gained in importance.  We appreciate it differently and it’s values are better understood.

New technologies such as 3d printing will find a niche, and diversify the range of options for people to create ceramics. Perhaps that introduces a bit more diversity and competition, but it won’t replace traditional practices.

It’s interesting too to reflect on the predictions a few years ago that studio ceramics was dying because of the growing interest in our engagement with the digital world, but I’d offer a contrarian view, supported by the growing number of ceramics classes (despite institutional cuts)

Many people are interested in what is missing in much of the digital world – tangible, sensory tactile experiences….and the current forms of 3D printing are a bridge between those two ways of making and experiencing things.

A hybrid space that is a fascinating and inspiring space to work in.

Can 3D printed ceramics really be art or is it just a manufactured artefact. Does it matter.

If there was still a relevant process based argument about the intrinsic value of manufactured and art objects then 3D printing buries it, at least in the sense of Walter Benjamin’s position on the art object’s “aura”. This is because digital technologies make it possible to vary artefacts iteratively, ‘on the fly’, so that no object produced is necessarily identically reproduced.

But although Benjamin’s argument centred on technologies, the status of an object has much more to do with its cultural framing than the technologies used…and that’s a different argument, I think.

Certainly ideas connected with 3D printing and the particular qualities that the method brings can make an important contribution to art.

However given the diversity of concepts and methods in contemporary art, including ceramics, assigning such significance to one particular tool is not really that important. 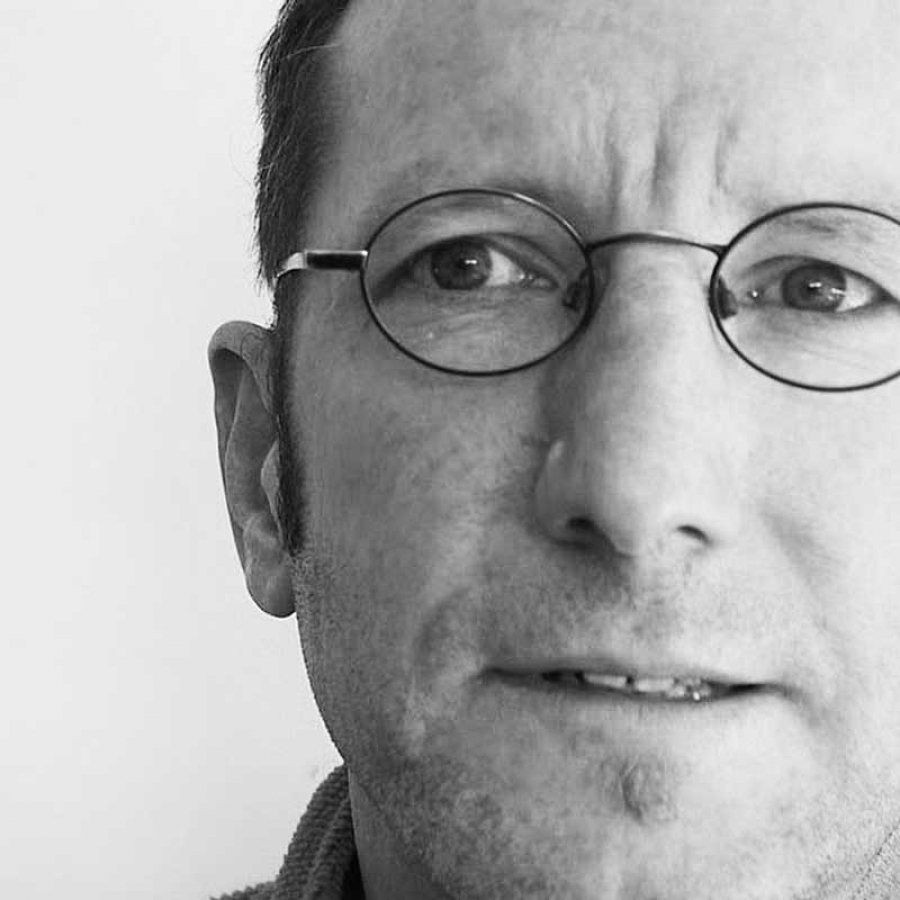 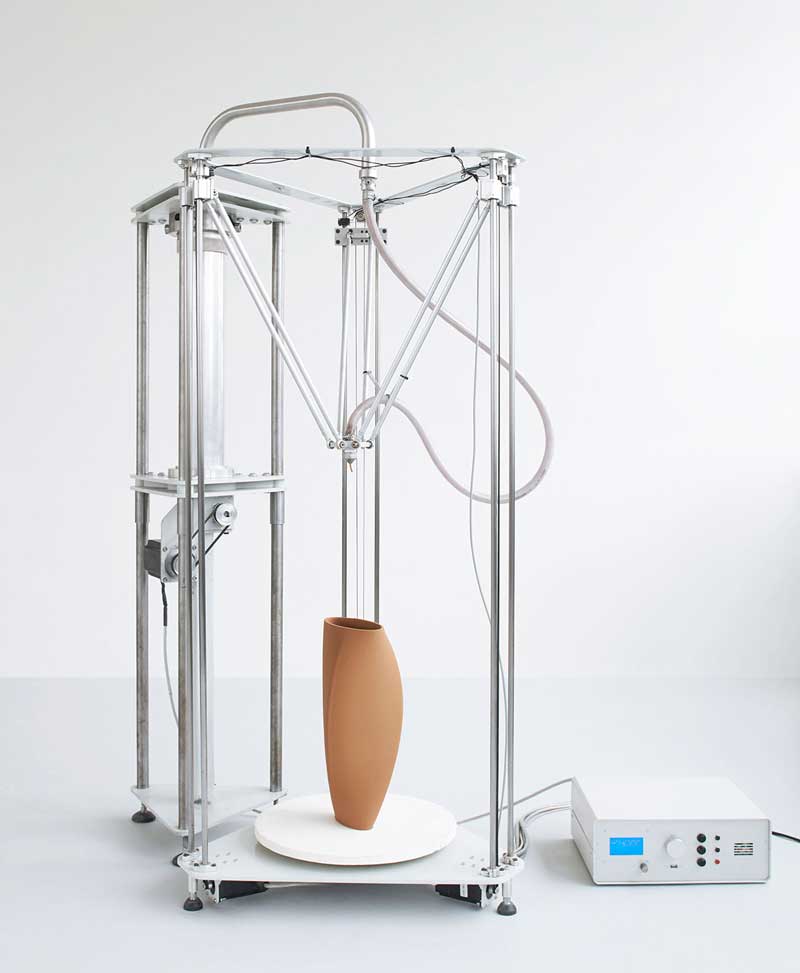 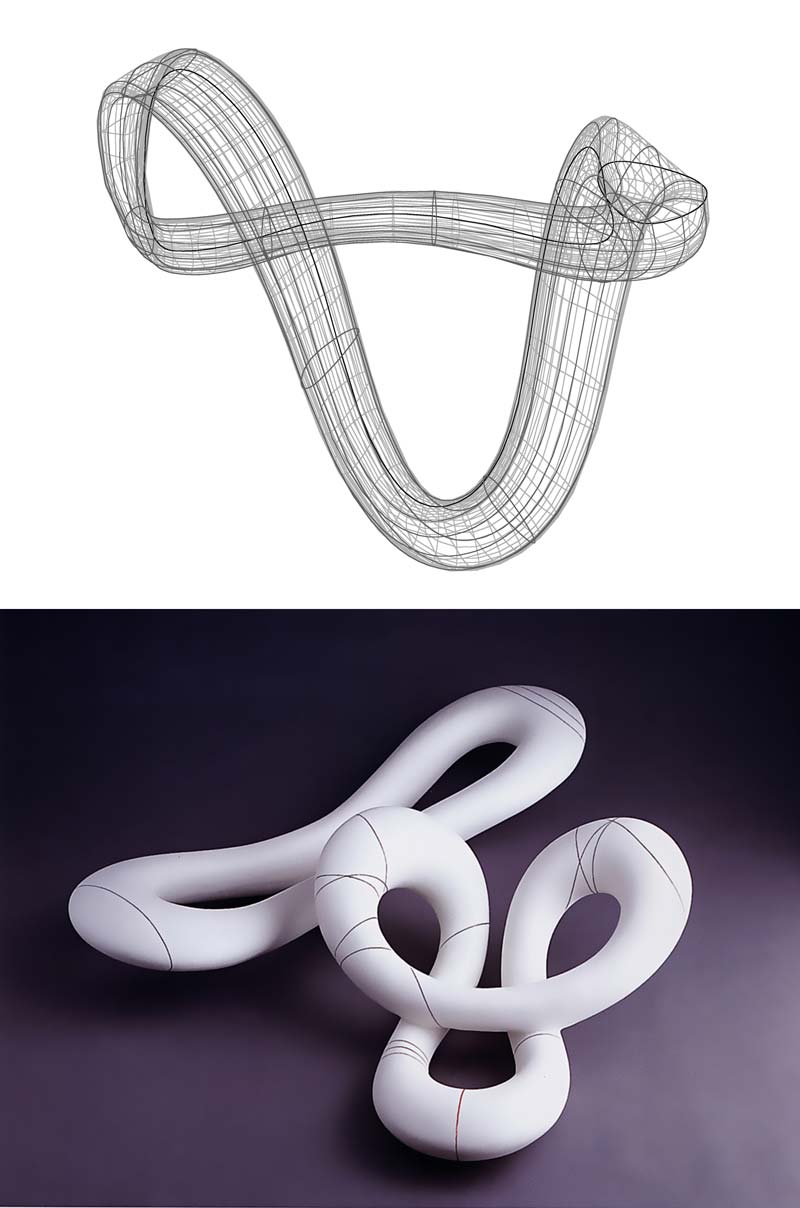 3D Wireframe and the final result 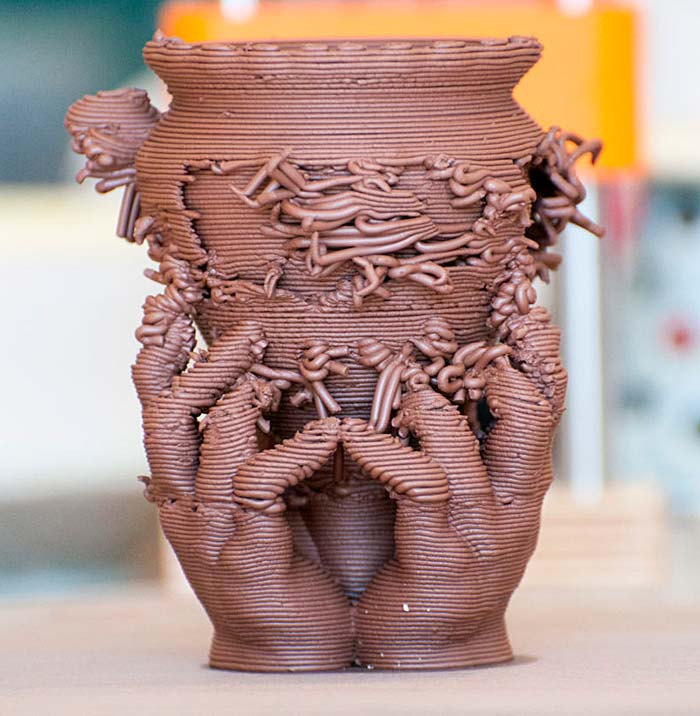 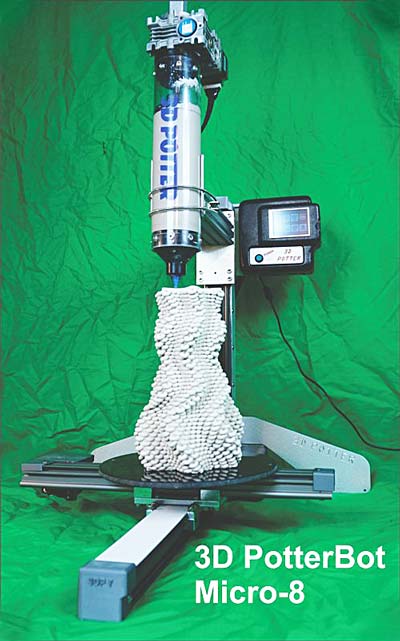 One of many 3D Clay extruders