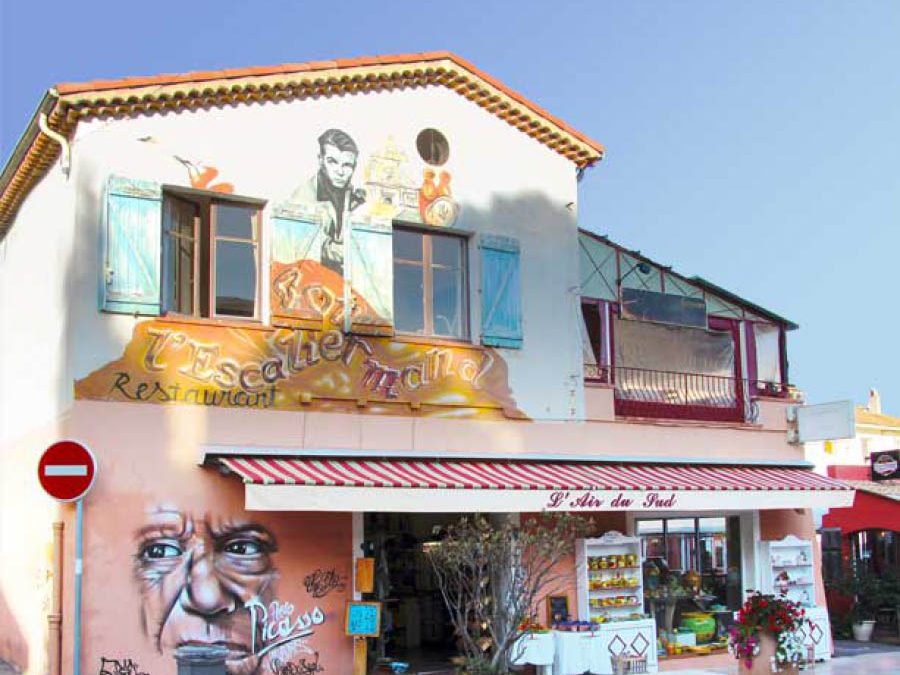 In July of this year with the assistance of an Arts Queensland Career Development grant, I had the privilege to take up a month long residency with A.I.R. Vallauris [Artists in Residence] is a non-profit association that welcomes artists from around the world to its lodgings and studios, to meet with local artists and to research new works.

First established fifteen years ago by ex-pat Canadian, Dale Dorosh. In this time A.I.R. Vallauris has hosted over 200 artists from across the globe. Set in the heart of the old town, A.I.R. Vallauris accommodates several artists at a time for one to two months using its residence and studios.

Artists are welcome Working in different mediums, artists (ceramists, sculptors, painters, photographers, videographers and multimedia artists) use fully equipped studios, live in individual furnished spaces and are afforded access to a gallery where their works are displayed and celebrated at the end of their residency period. Vallauris is situated between the Southeastern Mediterranean cities of Cannes and Nice on the French Riviera, is the Cote D’Azur region of Golfe Juan-Vallauris. While Cannes is famous for its uber wealthy and star-studded international film festival and Nice has its natural beauty of turquoise beaches nestled at the base of the Alps-Maratimes, Vallauris is more renowned for its ancient beginnings and historical ceramic foundations.

Part of the history of pottery First settled in 19 AD, Vallauris has had a long connection with the natural port city of Antibes to the west. The pottery-making traditions of Vallauris date back to the start of the Christian era. In Gallo-Roman times large deposits of fireclay were already being used to make bricks and pots. The village of Vallauris is now commonly known as “The town of clay”.

Vallauris continues to be dominated by potters and their studios. In the 16th century the town was ravaged by the plague. However 70 families from the surrounding area of Gênes later repopulated it among which were several potters. Their main production consisted of low-fired earthenware cooking pots. With a large source of local clay bodies and the presence of natural timbers, Vallauris potters fired all their work with wood kilns, many of which still remain standing but are all either transformed into alternative uses or under renovation for their preservation and protection. These wood kilns are unusual in their construction. They consist of very large stacking chambers (7x4x4m) with gabled rooves that have exit slots which act as flues. They have fire chambers beneath and studio wings either side. Highly inefficient, these kilns can still be seen around town with carbon soot coating the exteriors.

It is said that at the height of their productive years, the village was continually blanketed by clouds of black smoke with the only relief being the strong Mistral winds. At the end of the 19th century and beginning of the 20th century, the arrival of the railway led to a boom in the industry. Pots were transported in their thousands down the hill to Golfe Juan and along this rail line to be shipped out across the world from the port city of Antibes. The railway still exists today and, in many sections, travels virtually on the beach affording locals and tourists alike an uninterrupted view of the Mediterranean Sea.

Picasso’s ceramic practice In 1948, Picasso came to live in Vallauris where he stayed until 1955. It was in 1946 on a visit to the annual exhibition by the potters of Vallauris that by chance he met Suzanne and Georges Ramié, who owned a ceramics factory – the Madoura Pottery workshop. Picasso, who was keen to try something new, made his first ceramics and then decided to throw himself into the activity which offered him new creative horizons. Picasso’s methods were rather unorthodox, bending and altering production line pots into new sculptural forms and decorating them with images of his favourite subjects, bullfights, goats, woman and the like.

Madoura continues to operate as a gallery and the former studio spaces are currently under renovations. Picasso greatly contributed to the renaissance of the Vallauris pottery industry in the 1950s, this mythical golden age and time when everyone was a potter. His image and influence continues to permeate the culture. The Romanesque Castle of Vallauris, the former priory of the Abbey of Lérins, is one of the rare Renaissance edifices to be found in the region. It houses the National Picasso Museum, the Magnelli Museum and the Ceramics Museum.

My time in Vallauris was Term IV, between July and August 2016 of the residency program. I was joined by three fellow artists, including Hyunah Kim, conceptual ceramic artist from Seoul, South Korea, Aimee McLaughlin, textile and ceramic designer from New York City and Heather Morrow, a screen writer from Edmonton, Canada. Living for an extended period in Vallauris, sharing studio space with artists from diverse backgrounds and working local raw materials all contributed to a fresh and exciting outlook within my own personal practice. When in France – Use Limoges My work generally consists of wheel-thrown forms and high-fired crystalline glazes.

While in France I took the opportunity to produce work using Limoges Porcelain and locally sourced minerals and oxides. I relished the chance to use a small amount of Uranium Oxide, (a standard colouring agent for the potters of Vallauris before its placement on a banned list) within my own glazes. We all worked out of the “Blue Door Studio“ (a converted horse stable) which sits at the top end of the old town on Rue Rey. My daily walk up the narrow cobblestoned alleyways was lined with many three story terraced houses in various states of repair, most of which were built in the 17th Century.

July and August are within the peak summer months of the south of France. During this time many extra events are held. My time coincided with the XXIV Biennale International, Creation Contemporaine et Ceramique, a series of exhibitions and a competition, held in and around Vallauris since 1966. Since 2006 the Competition, reserved for artists residing in the European Union, has been reorganised into three categories: Container, Sculpture and Design. This year the choice of South Korea as guest of honour was to highlight 2016 as France-Korea Year.

The stated aim of the organising committee is “to allow new talents to be discovered, works from all countries to be compared and to bring artists from all nations closer together“. I was delighted and astounded by the variation and quality of works on display. Nearing the end of my residency, Vallauris came alive with music, dance, costume parades and throwing demonstrations in the streets. This was the annual Fete de la Poterie. When you combine all this and high quality concerts performed by maestros from the School of Music, an A.I.R. Vallauris residency is more than just making pots overseas.

During my residency I threw, fired and completed a series of crystalline pots that incorporated my thoughts and emotions during my stay. One particular piece was my response to the tragedy that occurred in Nice just days before I flew in. The piece is pictured here and is entitled “Still Live “. It encompassed three bottle forms representing the French way of life, a family so to speak. They were supported by a shadow form on which they were presented. The terrorist-like attack in Nice in July was indeed a tragedy. Lives were lost and a community was grieving accordingly. I felt a need to express this while I experienced the aftermath within the community.

The people of Vallauris and southern France were deeply affected by these events but the overwhelming sentiment expressed to me at the time was one of resilience and determination not to have these few change the lives of the many. I share this desire and wanted to express it. I am proud that this piece was chosen to enter the permanent collection Dale Dorosh is generating at A.I.R. Vallauris. I also took the opportunity to explore new territory regarding my techniques and styles. This resulted in work that departs greatly from my normal crystal pieces and uses new methods in their formation.

Having the extended space and time with the normal commitments diminished allows for explorations that just wouldn’t come about without this international “retreat “ type atmosphere. I have come away with a renewed enthusiasm and a fresh look and attitude to my creative life. These outcomes often come as a surprise but it is the nature of International Residencies that promotes these changes. In conclusion, I can highly recommend the experience to others. The A.I.R. Vallauris program is not cheap, but by its very nature offers a very different aesthetic.

For decades Australian potters have looked north to Asia for their influences, and rightly so. Asia is our closest neighbouring region and harbours centuries of fine ceramic traditions and knowledge, but to ignore European styles and histories is to deny ourselves a fresh alternative.

I thoroughly enjoyed my time in France and have returned with new directions evident. Changes that are not only influencing my thoughts on clay but on a deeper personal level as well. For this I will be forever grateful and wish to thank both Dale Dorosh and the team at A.I R. Vallauris for their professional program and support.

Bill Powell is a Queensland-based Ceramic and Glass Artist of forty years’ experience.

Bill Powell is supported by the Visual Arts and Craft Strategy, an initiative of the Commonwealth, State and Territory Governments.” 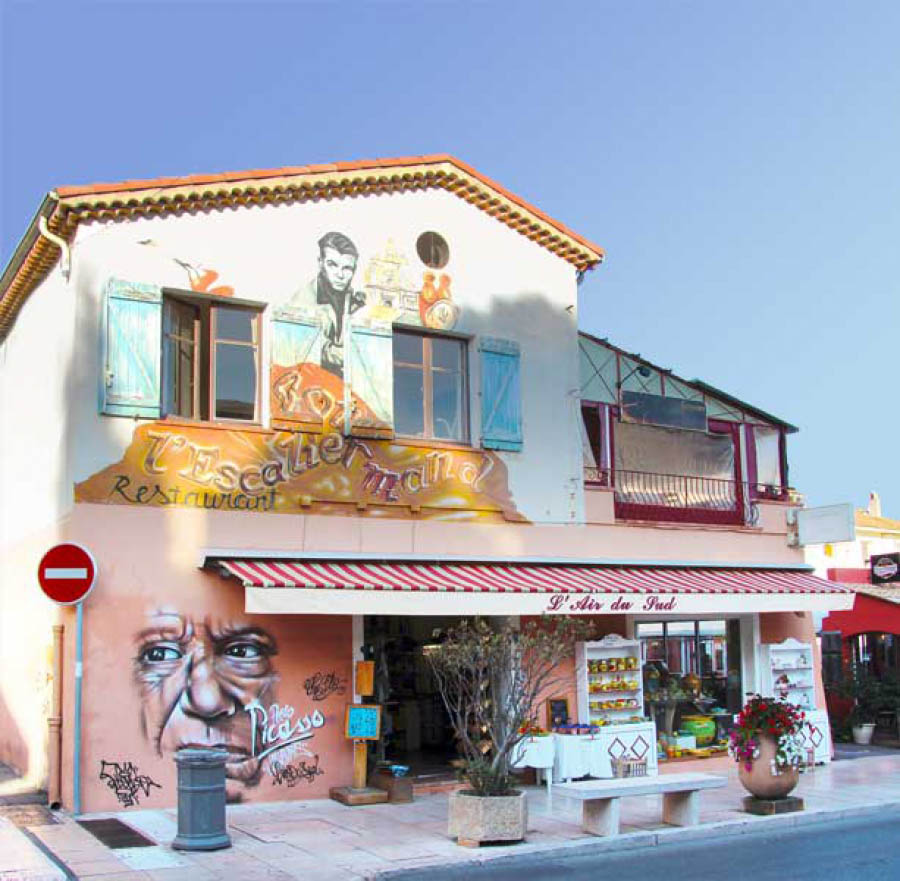