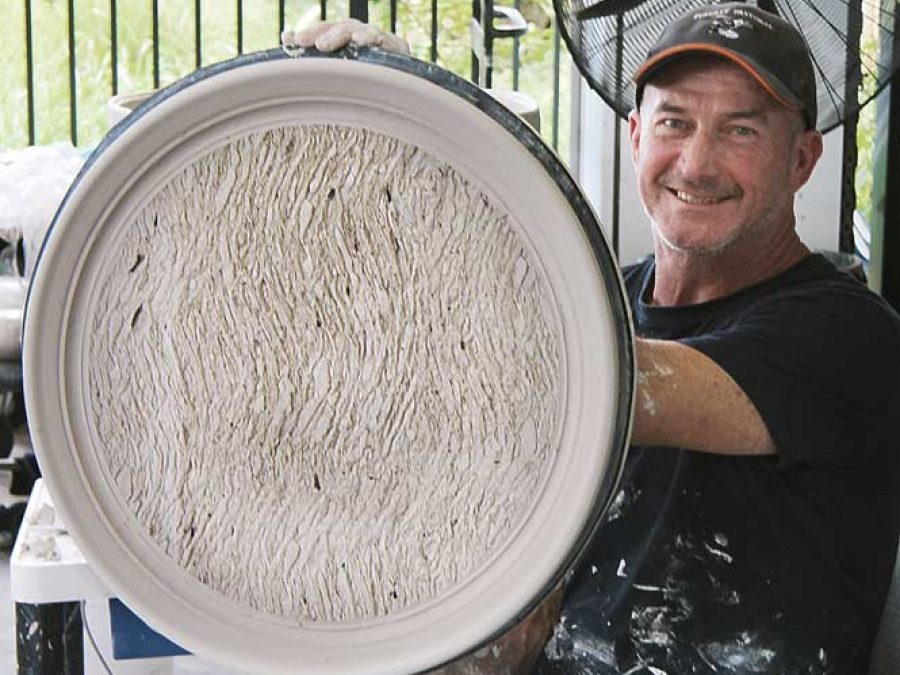 On a warm Brisbane morning more than twenty five potters gathered in the courtyard of the Brisbane Institute of Art. They came together to learn new techniques in the art of large throwing from an acclaimed expert as part of Ceramic Arts Queensland’s Toolkit workshop series. Toolkits allow successful and influential potters to share their knowledge and techniques with members and guests.

Today’s presenter is Cameron Williams, well known as a master ceramicist who started potting at the age of 14. His work is in galleries and public and private buildings including Australia’s National Parliament. Cameron has been running a successful ceramics business for over 30 years with a reputation for being able to efficiently produce stunning large scale architectural works. This has kept him in high demand over the past 20 years, with commissions for high end commercial and private clients.

Throughout the day, Cameron moved between creating a large urn in stages on one wheel and while this was slowly turning on the wheel to keep even drying, he would create each section of the urn and demonstrate how to throw several classic shapes.

Cameron started the day with what he called his “pre-demo demo” by pressing a golden palm leaf found onsite onto a slab of fresh stoneware clay. This he said, would be the first stage of demonstrating an instant mould making technique using latex to create texture for platters and pots. Firstly he applied a thick layer of latex over the palm leaf. To stop the latex from stretching out of shape he placed a Chux wipe over the latex and then another layer of latex over the top of the Chux.

He learnt this technique from a mate, he said, who makes fake logs for zoos. The faux logs were made by applying the latex to a local tree to capture the texture. The Cameron Check ListCameron took us through his check-list of the tools and techniques of his trade:

He uses Weathertex to make standard bats and for the larger bats, form-ply. The Weathertex bat is glued to the larger formply bat. Formply is a plywood with a “Plastic” or phenolic impregnated paper overlay

Weathertex is cladding used by builders, architects and designers made from pulped hardwood which is pressed with 3% natural wax to make Australian timber products.

“If I only had one tool it would be the wooden ‘mouse’ rib,” (right) he said. He does use other tools such as a sponge and metal ribs!

Cameron emphasised the importance of posture when sitting at the wheel to avoid back injury. “Sit with your bottom level with the wheel head so you can use your body as the main force.” His technique of using both sides of his body for throwing is also an important factor for back health and the reason he has had no problems with his back over the years.

For the workshop he used Walkers Special Stoneware which was donated by Durand Water Filters. In his own workshop, Cameron buys clay from the local brickworks and orders 30 tons at a time! He unloads in batches to a bakers dough kneading machine and mixes with pulped newspaper. His recipe: To a two litre bucket of hot water he adds the amount of newspaper found in a Sunday paper. He adds this mix to the bakers dough mix to make up 200 kilos at a time. Cameron likes this clay because it produces a strong buff stoneware clay with very fine grog.

Cameron uses Brent wheels made by American company, Amaco which he sources from Keanes Pottery Supplies in NSW. For very large pieces, Cameron uses a wheel he has made himself on which he is able to throw his 300 kilo pots. For information on Brent wheels visit: https://www.sheffield-pottery.com/Amaco-Brent-Potter-s-Wheels-s/51.htm

Cameron uses very large trolley kilns. His trolley kiln is a 400 cubic ft. gas kiln which he purchased from the local brickworks.

Cameron started by throwing a vase form with about 5 kilos of clay. Doing this before his workshops “gets him in the right frame of mind”, he said. He started centering the clay by anchoring his left arm against his left leg. His left foot is sitting on a brick for balance.

He places his hands at “9 o’clock” and then moves them around to “6 o’clock, using fingertips to draw the clay onto centre. He cones the clay up and presses down a few times by pushing the upper part of the cone to the left with his right hand. Coning up and down like this is essential, he said, for removing any irregularities in the clay.

He then creates a hole in the centre of the clay mound using a flattened right thumb and with his thumb pushes away from his body to open out. He compresses the base and creates a “bowl” shape for the base before bringing up the walls.

Cameron’s tip for centering a lump of clay is to make a “volcano” top when first coning up to avoid dip in top and to keep your thumb upright against the cone using a “mountaineer” thumb position – like a mounaineer moving to the top of the “mountain.”

When making bowls it is important to finish shaping the pot making sure to get the transition of the inside curve right. You can remove clay from this area with a metal rib rather that compressing the clay into base. When all else fails and there still remains a “beginner’s hump”, wait until the pot is leather hard and turn the inside to please the eye!

On the platters he showed how he uses the latex textures of the palm leaf and bark from an onsite tree he had prepared earlier. On the base he gently massaged the texture through the covering layer of Chux to create the depth of texture required. “This looks great with a pooling glaze,” he said.

With the texture in place he works on the rim with a sponge, lifting, compressing and flattening to form a “frame” for the textured interior. To avoid turning, he under-cuts with a knife and adds an indent with the butt of the knife to accommodate a wire to hang on the wall. “No one has space for this size platter but they usually have plenty of wall space,” he said. He makes the rims to these large platters thicker than normal to achieve even drying.

Cameron begins his multi stage urn by centering four and a half kilos on a large bat and compressing and flattening to the perimeter of the large bat.

He has a ready prepared large coil straight from the pug mill of about 10-12 kilos which he wires in half length-wise. He flattens the mound and opens out with a sponge in his left hand and pulls out with pressure on with his right hand. He opens to a flat surface and uses the metal rib to clean the surface. He leaves a slight rim on the outside and places the two coils around the perimeter of the flattened clay using a mallet to beat against the outside of the coils to seal onto the clay base. He applies water to centre the coil and using a large sponge, braces his right elbow against his right leg and begins to bring the walls up, while still centering the mass.

He continues to bring the wall up while keeping the walls on a slight angle towards a cone shape or as Cameron said a “cooling tower” shape. He then moves the rim out to where he wants the final diameter and compresses it to give it strength and stability.

“You should be mindful of how you want to leave the rim for each section – compressed and slightly curved in.”

He smoothes the outside with a wooden rib paying a lot of attention at this stage to stabilising the form which is straight with a return at the top.

Firming with the blow torch

Cameron uses the blow torch on the outside and inside after each section is added. He stressed that when using the blow torch it is important to keep the wheel spinning at a slow constant rate and to apply the flame to the same spot as it spins. When firm he pinches the rim and splits the rim to form a gallery to accept the next stage which will be placed on the inside – very much like the way a lid fits into the gallery of a lidded pot. He uses a large flat wooden tool for a final compressing of the walls and leaves the wheel spinning slowly to even the drying while moving to the other wheel for the next shape.

He continued this process to create the final form which was pure in shape and balance and the work of a master.

While each section of the large pot was drying, he demonstrated various forms including a sphere/blossom jar, bowl, cylinder, large platter, a gourd shape, ‘tear-drop’ bottle and a coffee mug thrown off the hump. 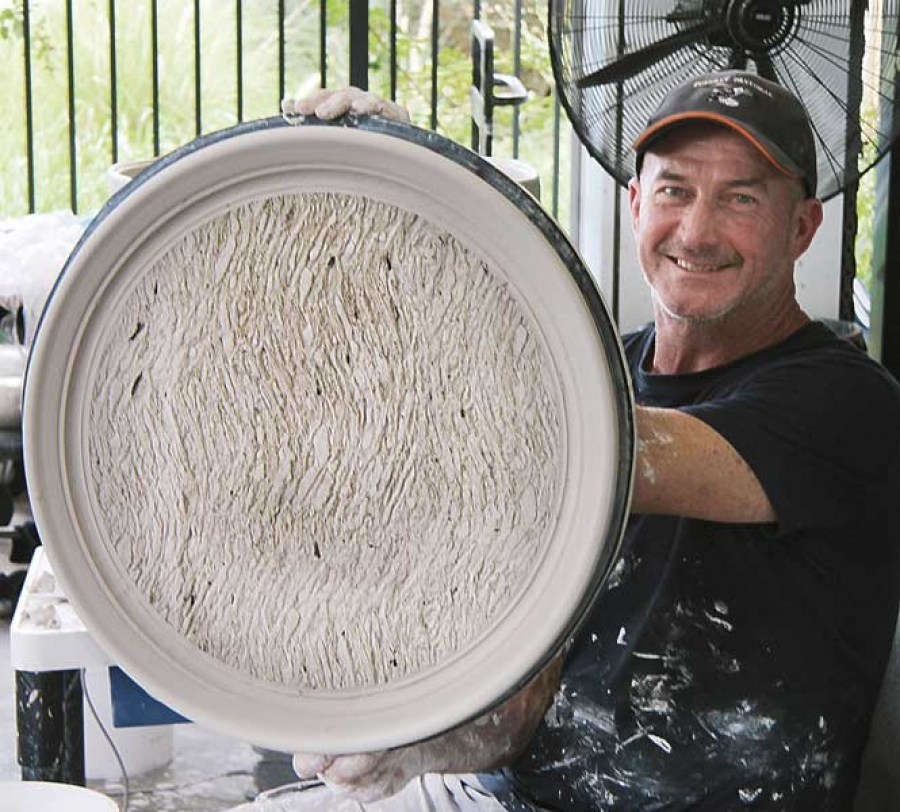 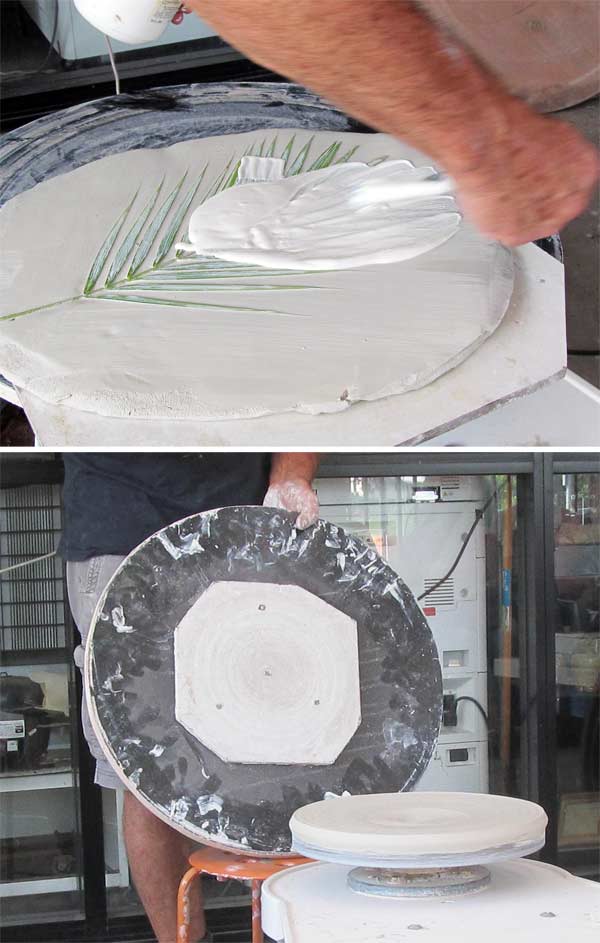 Cameron Williams with leaf mould and his bat

Large pot construction Clockwise from top left: 1. Centreing the clay, 2. Compressing 3. Pulling out the clay to the perimeter 4. The finished base with slightly raised walls 5. Adding the sliced half coils 6. Forming the coils 7. Drawing up the walls 8. Compressing the rim 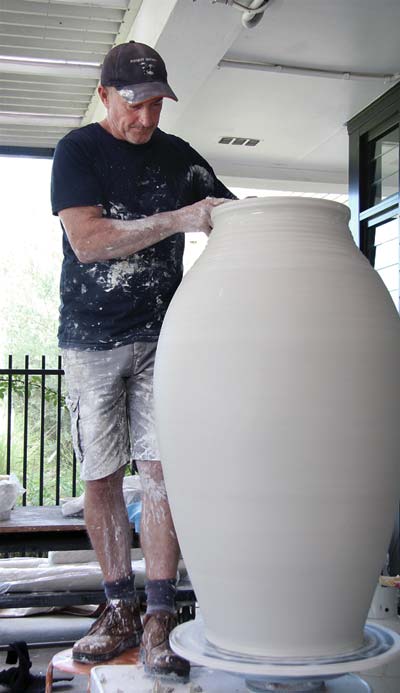 Cameron puts a finishing touch to a massive vase 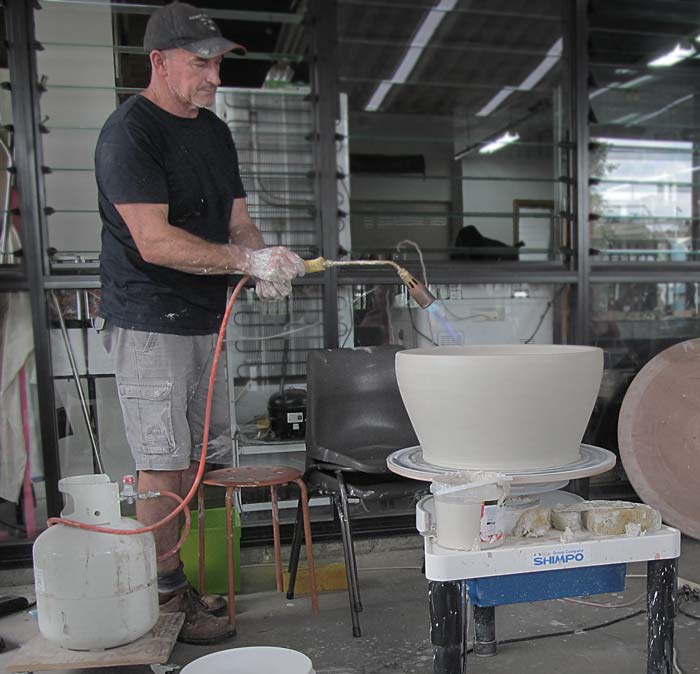 Firming the early layers with a blow-torch to add rigidity